Good Bottom Fishing after the Floods

Good Bottom Fishing after the Floods
Offshore Fishing Report – Durban – End April 2019
Easter weekend was a washout with heavy rains ending with floods on Monday night. On Tuesday the harbour was filthy and full of debris and litter that has washed down from rivers and storm water drains, the sea was also a mess, as the week went on the debris in the harbour remained but was taken away by currents offshore leaving green water with the first few meters filled with freshwater. I have never before seen so much empty plastic bottles floating around out at sea as I did after these floods in my life before, it is so disgusting to se mankind’s litter all over the ocean, the harbour has been a cesspool of filth and it stinks. Clean up operations have been fruitless; more rubbish has drifted down after so much effort was put in. Very difficult conditions to fish in and we have found no game fish at all. With on the first few meters of water not good the reefs seem to be unaffected and we have had some really superb bottom fishing with loads of Slinger being caught along with a few other species, all average sized fish and many multiple hook ups with a fish on every hook dropped down. In no time quotas were filled. On one trip we had full quota of bottom fish for all on board within the first hour and then tried in vain for the rest of the trip looking for Tuna. Yesterday we ventured out to deep waters after bottoms first and found out deep that the water is clean, blue and warm but sadly void of life. During the next week I think the offshore waters will improve quickly but the harbour will take a while to clean up. To all those who have volunteered and spent their own time to assist with clean ups all around a BIG THANK YOU and my respect, a big thumbs down to the municipality for leaving things to get this bad and not making much effort to clean up leaving it to volunteers.
www.bluewatercharters.co.za 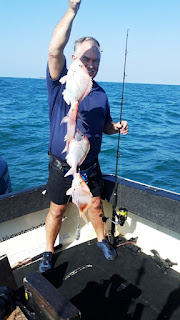 Posted by Blue Water Charters - Durban at 5:25 AM 1 comment:


We launched into nice conditions today for a short 5 hour trip, it was action packed early with some Sarda Sarda on light tackle, we were supposed to go do bottoms but so much fish were being caught that it never happened. As we about to pull lines up to head back to port out guests asked to extend their trip by 3 more hours and so I made a turn and started heading out again, immediately on the turn we had a double hook up with 2 big Bonito, and the Sarda Sarda action continued and then we has an almost full strike and fought all the fish to the boat, there was 1 line remaining in the water, we had 14 Sarda and 6 Bonnies in the hatch. After we got the fish on deck I put the speed back up again and before we could put any lines out the remaining line popped of the rigger and we had a proper fish on and were into the backing, soon after we saw a Black Marlin jumping. This was a long hard fight as we hooked up on light tackle with a Tyrnos 30, we got the fish to the boat and then he turned as was into the backing again, the Marlin made 2 more strong runs each one shorter than the one before and eventually we got the fish to the boat and successfully released a Black Marlin of about 180kg (400lbs). Well done to Darren on catching and releasing his first Marlin, and a special note of respect for fighting the fish so well on the light tackle. 2 Trips and 2 Marlin for Blue Water Charters. 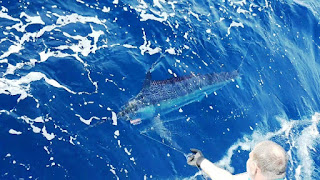 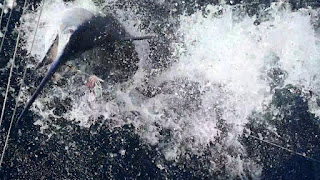 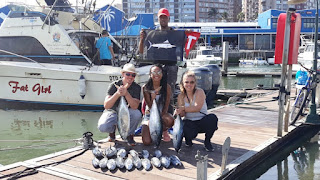 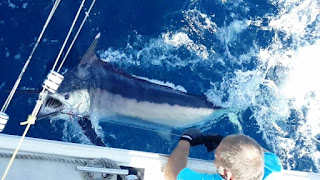 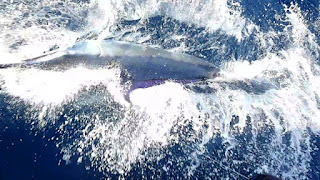 Posted by Blue Water Charters - Durban at 10:18 AM No comments: 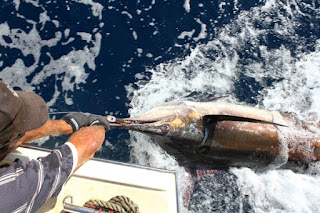 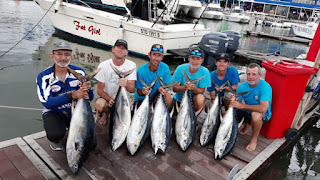 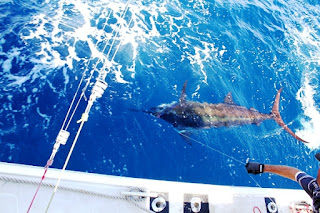 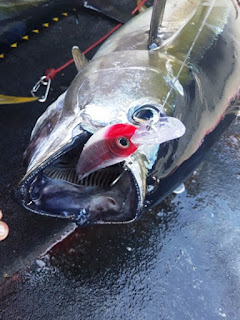 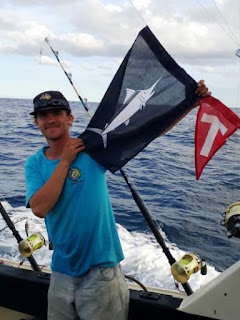 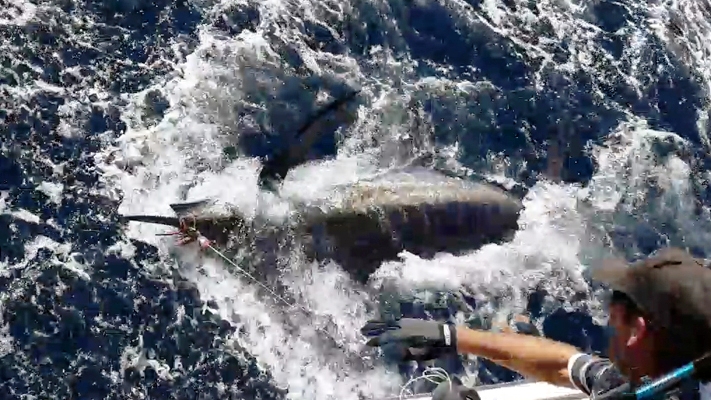 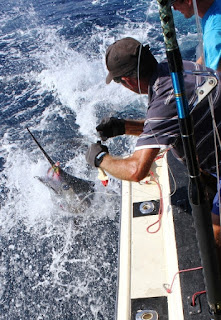 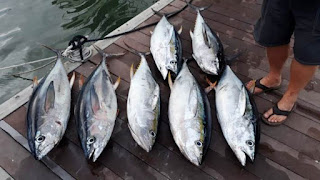 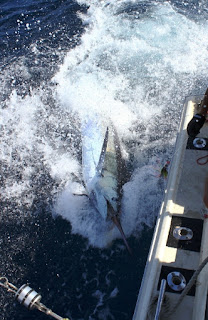 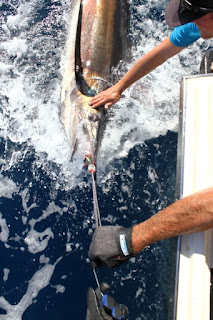 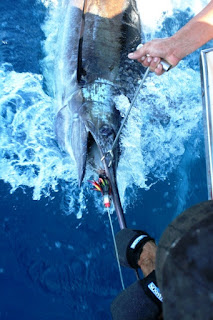 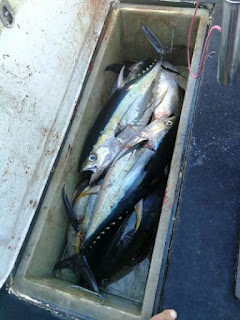 Posted by Blue Water Charters - Durban at 3:24 PM No comments: