We had a local family book an afternoon 3hr Family Fun harbour fishing trip with a delighted young man who had his first ever fishing trip on a boat. During the 3hrs we managed to hook up 7 shad (All released as it is closed season). Dad managed to have a fantastic tussle with a smaller Hammerhead Shark on light spinning tackle and Mom got herself a nice Bar Tail Flathead. We were hoping to get a grunter for the young man but he caught his first fish ever from a boat, he was so excited. 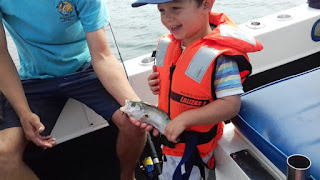 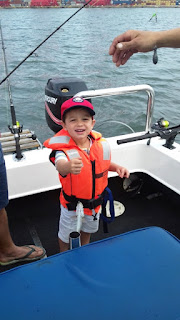 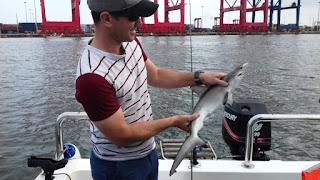 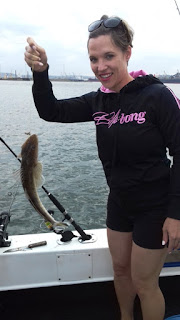 Posted by Blue Water Charters - Durban at 4:39 AM No comments:


Our morning trip started out with great conditions and we had just set our spread when the Tyrnos started screaming and the rod had a good bend on it, after a good fight what we thought was a Yellowfin Tuna turned out to be a Beast of an Eastern Little Tuna. After that we managed 2 Oceanic Bonito and on the way back we hooked into 2 Yellowfin Tuna giving us a Grand Slam of 3 species of Tuna on 1 trip. 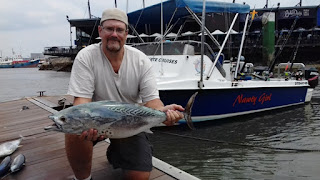 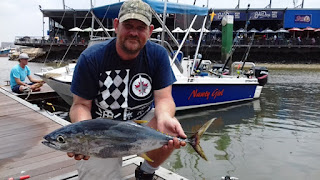 Posted by Blue Water Charters - Durban at 2:54 AM No comments:


I met up with Olivier and Janick from Reunion Island on the afternoon of the 8th of October and we set up camp with 3 days of Bass ahead of us, it was windy that afternoon making setting up the tents a challenge but with everyone working together it went rather fast, we then proceeded to make a fire and had a braai (barbecue) whilst getting to know each other and discussing the events for the next few days.


Awesome weather was presented to us and our morning session went well with 6 largemouth bass landed and released, most of them around keeper size (30cm), nothing took on top water and so we had to fish deeper to get some fish. The afternoon went slower and we went even deeper and we got 4 more bass, Janick was going really slow and this paid off and he landed himself a large bass. Olivier was not going to be left out and very shortly after landed himself a good size bass but not as big.  Janick had caught himself the bass of his lifetime we had caught and released a total of 10 bass for the day. We went back to camp and had a good braai and early to bed.


Again we had awesome weather and the morning session delivered us 7 bass all around keeper size, the afternoon session proved to be tough and we only landed 3 bass giving us a total of 10 for the day. Back at camp everyone had their duties and very quickly a braai was on the go.


The weather was fantastic and we went to the bottom of the dam this time, the water was crystal clear and there was 1000s of baby bass swimming around the weed beds, we also saw some monster size carp. Here we were able to get 8 bass on top water for the morning session.


For the afternoon we went up towards the top side again and landed another 7 bass. All our bass for the day were keeper size. We got 15 bass for the day, bringing our final tally to 35 bass over the 3 days including 2 good size fish.


I was awoken at about 01h30 in the morning by what sounded like my tent being ripped open along with some really strange grunting sounds, so after looking around the tent and seeing no holes I proceeded to quietly open up the tent and investigate, I discovered 5 Zebras chewing grass right on the sides of my tent and the grunting noises was the Zebras farting, between the 5 of them it was a continuous string of farts each one producing its own notes, with some harmony they could have made a melody. Later that morning we woke up to overcast conditions with light rain and after breakfast we packed up camp to make our way to Jozini to hunt some Tiger fish.


The almost 400km trip to Jozini was not pleasant, heavy rain with poor visibility, terrible Friday drivers making it a long trip. Olivier and Janick went off ahead of me and stopped in St. Lucia for some sea food, towing took much longer especially in the conditions.


We arrived at the campsite and the rain gave us a break to set up camp, make a fire and have a braai for supper, later on the rain continued.


It was raining and cold and we launched the boat and went out fishing anyway, it rained most of the day with a few breaks and we managed to land and release 15 Tiger fish for the day. The rain let up and brunch time so we could make some food. That evening it rained heavy and we had to make our braai under the roof ledge and went to bed very early.


The rain was gone, we saw a beautiful little owl n the tree above our campsite. The overcast conditions made for perfect tiger fishing and we landed and released 26 Tiger fish for the day. The animal and bird life around the dam is phenomenal and we saw a huge variety of bird life including a Marshall Eagle, a Vulture and a Fish Eagle up close. Plenty Giraffe were around, the White Rhino were at the launch site and they had a small calf with them and we even got to see a Jackal. That night at the campsite the little owl reappeared and we saw another larger grey on in the same tree.

The water was clear and we only did spinning for Tiger Fish the whole trip, most our Tigers were caught on top water, although the water level is still slow there is plenty greenery around and it looks awesome. Bringing the boat out the water we where given the task of changing a flat rear tyre on the car which I later discovered to be bits of smashed up wheel bearing that someone has left on the slipway.


We were up early, packed up camp and left by 05h30, Olivier and Janick got to the airport well within time for their flight home and the trip back to Durban was a pleasant one.


For the whole trip our total tally of Bass and Tiger Fish was 83 Fish so a really great trip with some great fishing action and tons of wild life. Other than the rainy night the camping was also superb. 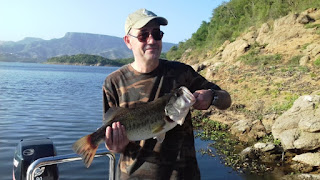 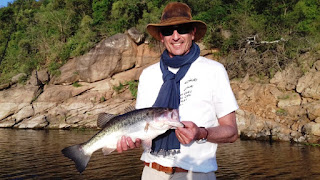 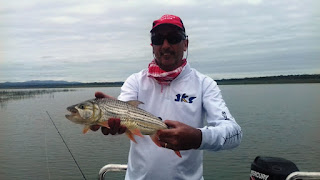 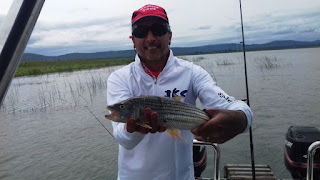 Posted by Blue Water Charters - Durban at 9:01 AM No comments:


After yesterdays NE winds it was a bit choppy today but settled down as the day went on. We had a short morning trip and on our lighter tackle managed to land a really large Dorado Bull to open our Dorado account for the new season. Wow, what a fish to open the season account and congratulations to the young man who fought so hard to land it. 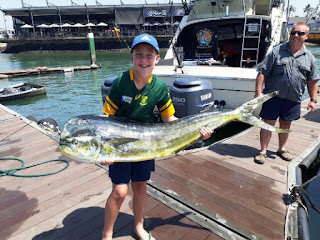 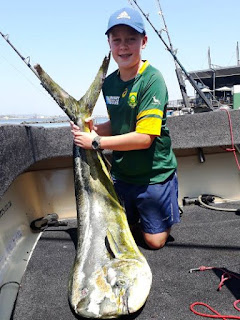 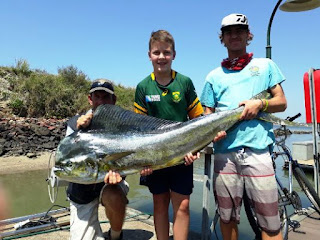 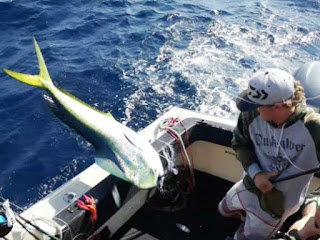 Posted by Blue Water Charters - Durban at 9:59 AM No comments: