A Stormy Dorado into the backing


We had a family from Vryburg booked a 5 hour charter Nawty Girl for this morning, and even though no rain was forecast there was a light rain at 05h00 this morning and so as Fat Girl was not out I decided to take them out on Fat Girl at no extra cost so they could benefit from the shelter of the cabin.


So it was raining, and as we headed out of port there was a thunder storm with lightning over Durban North and Umhlanga and I could see clear skies in the South so I decided we will fish South today. Inshore the water was colder at 23deg.C and so I tried a bit deeper on the 150m but it was not much better at 23.4deg.C and so I decided to go shallower and target known pinnacles and wrecks. The water was not that clean and but over a wreck in about 80m of water I saw some good fish showing on the sounder, but they were not coming up even after several passes, so we moved away, I saw no evidence of game fish anywhere else so decided to persist on the 80m wreck and after the 2nd pass the reel started screaming and line was peeling off. When I saw the showings I had thought they were Yellowfin Tuna, but when the line was running I could see the fish was staying on the surface and so I knew it was not Tuna and guessed it was a large Wahoo as the fish had peeled off the 300m top shot very quickly and we were into the backing, once we had gained some line and the fish was 200m out to my surprise there was a Dorado doing acrobatics and jumping all over. In the end we landed a decent size Dorado but it was a lot smaller than the strong fight it gave.


With 2 hours left Dad had his fish and it was time to get the little guy have his turn so out came some light spinning tackle and bait and we fished a pinnacle catching various smaller species, some Trigger Fish, Slinger and a nice Englishman. Father and son were now both happy with their catch and we headed back to port and docked just after 10h00. By that time I was wet and cold as we had to pass through some rain to get back. 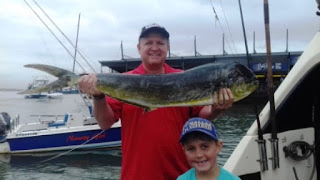 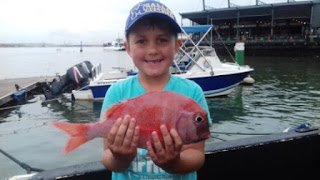 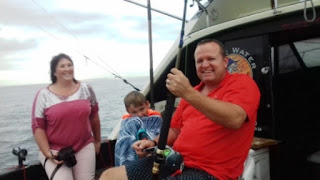 Posted by Blue Water Charters - Durban at 4:11 AM