Stunning weather today with flat seas, which was great after all the lousy weather we have been having, we were supposed to do the trip tomorrow but the forecast looked terrible so we moved it to today.


Inshore the water is still green, but deeper out we found crystal clear blue warm water and there is still a lot of litter floating around which is annoying as it keeps snagging the lures, none the less there was less litter than our last trip.


Our trip today was a short 5 hour trip with a family from Gauteng and we launched from Wilson Wharf at 05h00 and made our way out to sea to be back by 10h00. It was not long after we set our lines at about 06h00 when one of the reels started screaming with a serious bend in the rod and a big fight followed, I thought it was a large Yellowfin Tuna by the way the line went deep and about 1 hour later we found that we had tail hooked a Hammer Head Shark with one of the Rapalas, no wonder we had such a big fight on our hands and the angler was very excited with his catch, we had teased him about taking so long but he did well with a tail hooked catch.


This was not to be the end of the surprises and when I got my hands onto the Shark I found that the leader had wrapped around the lower tail fin with a single wrap so even a brief moment of slack line would have resulted in the fish coming off. With the Shark safely released and back in the water we continued out to deeper waters and managed to land a small Yellowfin Tuna, by then time had run out and we headed back to port. 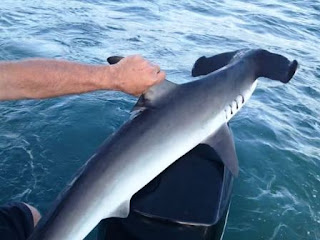 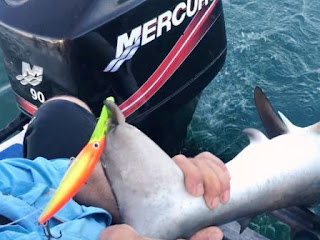 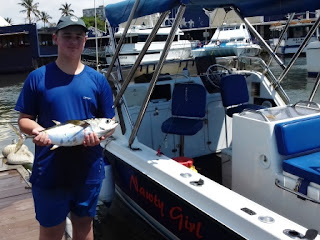 Posted by Blue Water Charters - Durban at 5:41 AM