OFFSHORE MARLIN REPORT - Durban 14/01/2016
Wow what a stunning day, sea was flat like a lake water at 26.5deg.C and that deep purple we always long for. I see that the sun is starting to rise later already, time flies. We did a long trip yesterday to specifically find a Marlin and we travelled almost 90km from Durban. We left port just before 04h00 and it was slightly overcast, after about an hour the sun showed its face and gave us a glorious sunrise, as the day went on the day turned out sunny. At about 06h30 we dropped lines some 50km out of Durban and just before 08h00 the port outside rigger line went tight and a nice 30min battle followed and we got a nice Striped Marlin next to the boat which we released. He gave us a fantastic jumping display and had all his lights turned on and was glowing. Later on during the day we had a double Dorado hook up, we lost one but landed a nice size Bull. At midday the wind turned to the poison SE and we had no more luck with fishing. Then we had to make the long trip back to port. 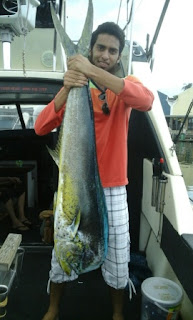 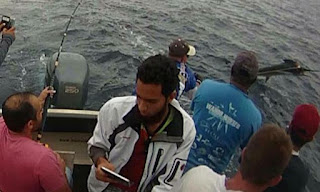