Today we installed our New Furuno NavNet TZ2 GPS/Sounder complete with a commercial transducer. Best Technology on Fat Girl now. This system is great and not only do we have a fantastic Fish finding ability with this technology we also have complete and up to date weather/SST etc. overlays on the GPS. Time to play and start using it. 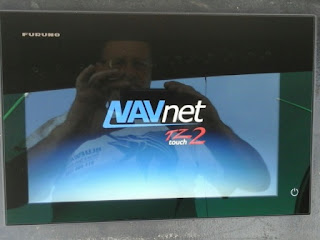 Posted by Blue Water Charters - Durban at 1:09 PM No comments:

OFFSHORE FISHING REPORT - Durban - 24/11/2015
Wow but we have sure had some nasty winds and this weather always gets us shuffeling our trips around. Friday started out great and then the NE started blowing far to strong and we ended up having to turn and go back early and the rest of the weekend was a write off. We did a night trip last night in stunning conditions and even though it was full moon we managed to land some nice bottom fish.
Posted by Blue Water Charters - Durban at 12:03 AM No comments:

OFFSHORE FISHING REPORT 14&15 NOVEMBER 2016
It was great to be back out on the water again after a long while. Saturday has a very strong SW west, the sea was big and it pretty much rained the entire day. We had 2 x 5hr Charters one in the morning and one in the afternoon. We ran light tackle and kept inshore in teh sheltered area to target Snoek, Tuna and Bonnies. On both trips we got Bonnies with the biggest around 3Kg which was great fun on the light tackle. I really hate being out in the rain getting cold and wet, but its still beats a day in the office.
Sunday was great conditions in the morning and the seas were flat, we ran out far North looking for some Dorado, Tuna and hoping for that elusive Black Marlin. All the way out we got nothing, and when we turned to come back I came in shallow and worked the ships which yeilded us Yellowfin Tuna and a Tropical Yellowtail, we also got a tiny Dorado of around 1Kg which we released along with the Yellowtail. On one ship we found a big school of Dorado and I tried everything but they refused to bite. As we got closer to Durban the SW started pumping harder and harder and the last 10km we decided to make a run for it as I saw heavy rain on the horizon. It was a good choice as we had just finished cleaning the Tuna for our guest when the heavens opened. Fat Girl is running awesome and it was a great feeling to pass everyone on the way in who used to pass me, those days are over, Fat Girl is a beast now and Rocks.
Posted by Blue Water Charters - Durban at 12:17 AM No comments: