FISHING REPORT - 20&21/12/2014 - DURBAN
South Africa and All Africa - All Tackle Record (Unofficial)
I was very hesitant to make this post with all the "critics" out there with big mouths and nasty words, but have decided to go ahead with this post anyway.
The last 2 days have been interesting fishing, in the last few weeks the warm water has been out deep and inshore has been cold, then on Friday night we had a storm and as we left the harbour we ran straight into 24deg.C water, the SW wind was howling and the S-N current was screaming, fortunately the waves were small. At around 90m I saw a huge fish on the finder 20m below the boat and turned around to tell the crew as the RH inside rigger band snapped and we had a small Black Marlin on, as he jumped I saw the lure swing off and he was gone and only had his Bill wrapped with the leader. After that we managed 1 Dorado. Today we made our way North in stunning conditions and once past Ballito we found some really good clean Blue water on the 110m line, when the RH corner reel screamed. After a good fight we had a large Short Bill Spearfish on board, after a quick photo we released the fish and it swam away. A little later on, after we had started heading back home we found the fish dead and floating and so brought it on board. We also managed 2 Dorado of which 1 was a nice Bull. Once back at the docks we weighed the Spearfish in at 38,3Kg and after some internet research found that this has exceeded the South African and All Africa records substantially but not the IGFA World Record, although we are not claiming any official record its nice to know. This was my first-ever Short Bill Spearfish off Durban, and although I am very pleased with this result I am saddened that the fish did not survive, we did what we could and could have just left it at that when we saw it floating and called it a successful release, but I believe that if you kill something you must eat it and so we brought it back with us. 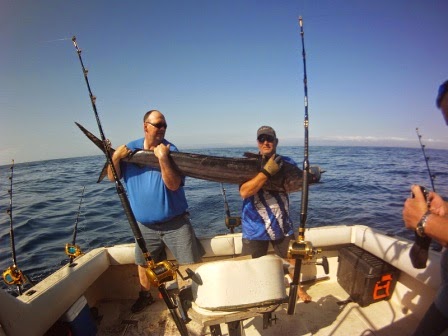 Posted by Blue Water Charters - Durban at 11:57 AM