FISHING REPORT: We launched at 06h30 this morning and trolled for a few hours and we got 3 Yellowfin Tuna, then we stopped for bottoms and we got a load of fish and a wide variety of species. This trip I also fished and I decided to fish with a light 20lb rig and caught a young Mako Shark of around 8Kg, this shark was really fun to catch and revved me proper on the light tackle and was released. Weather was great, the swells were on the large side conditions were very pleasant. We saw some whales and Dolphins around and quite a lot of turtles. There is a fair amount of birds and a lot of bait fish around. 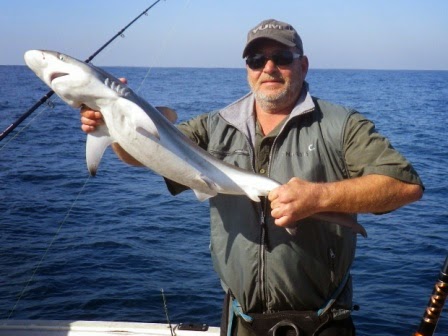 Posted by Blue Water Charters - Durban at 7:28 AM 1 comment:

Hannes gets into a stubborn Bonnie on Light Tackle off Durban

Hannes gets into a stubborn Bonnie on Light Tackle off Durban
https://www.youtube.com/watch?v=hDtCinPdDWo
Posted by Blue Water Charters - Durban at 11:08 AM No comments: 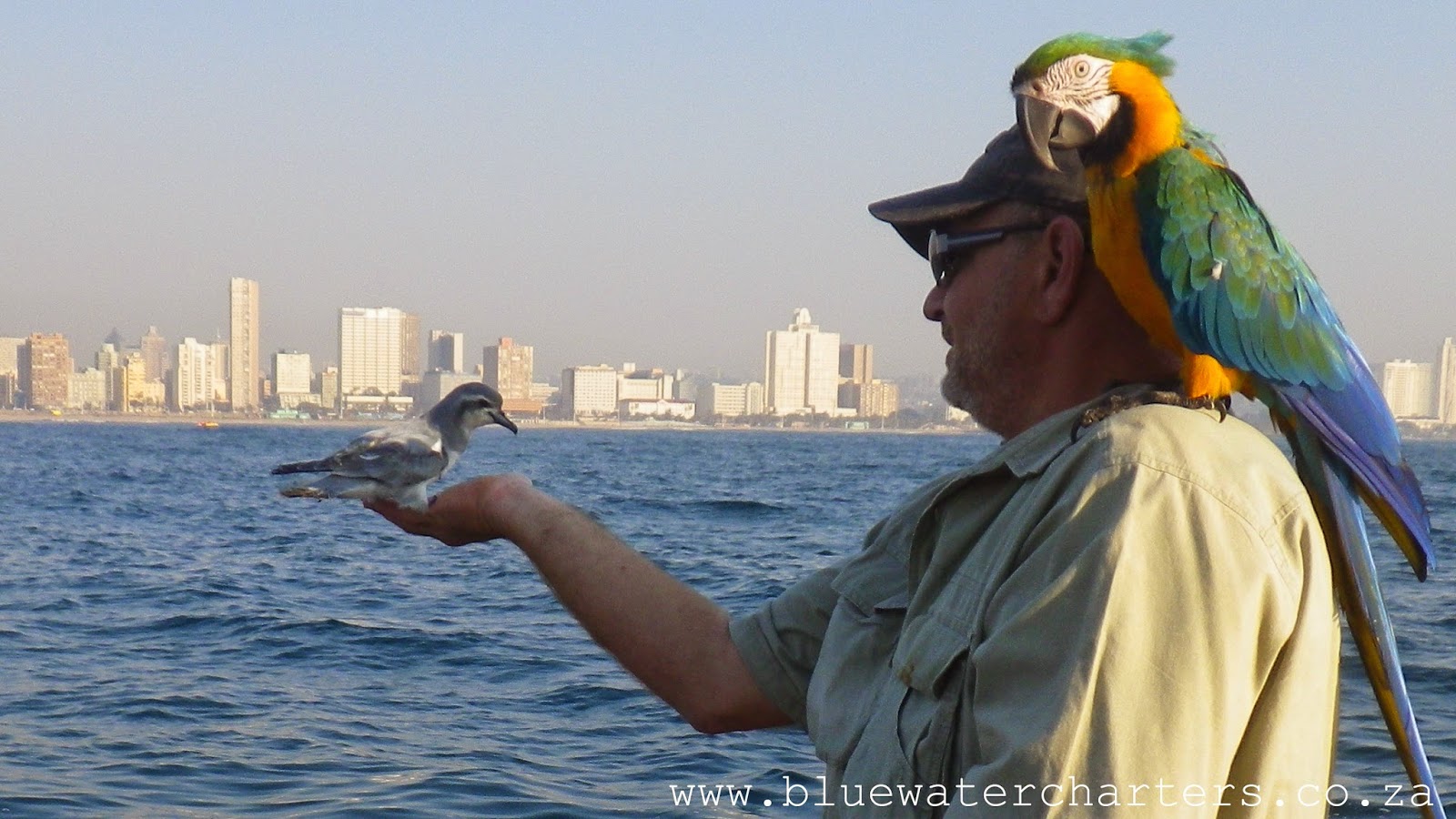 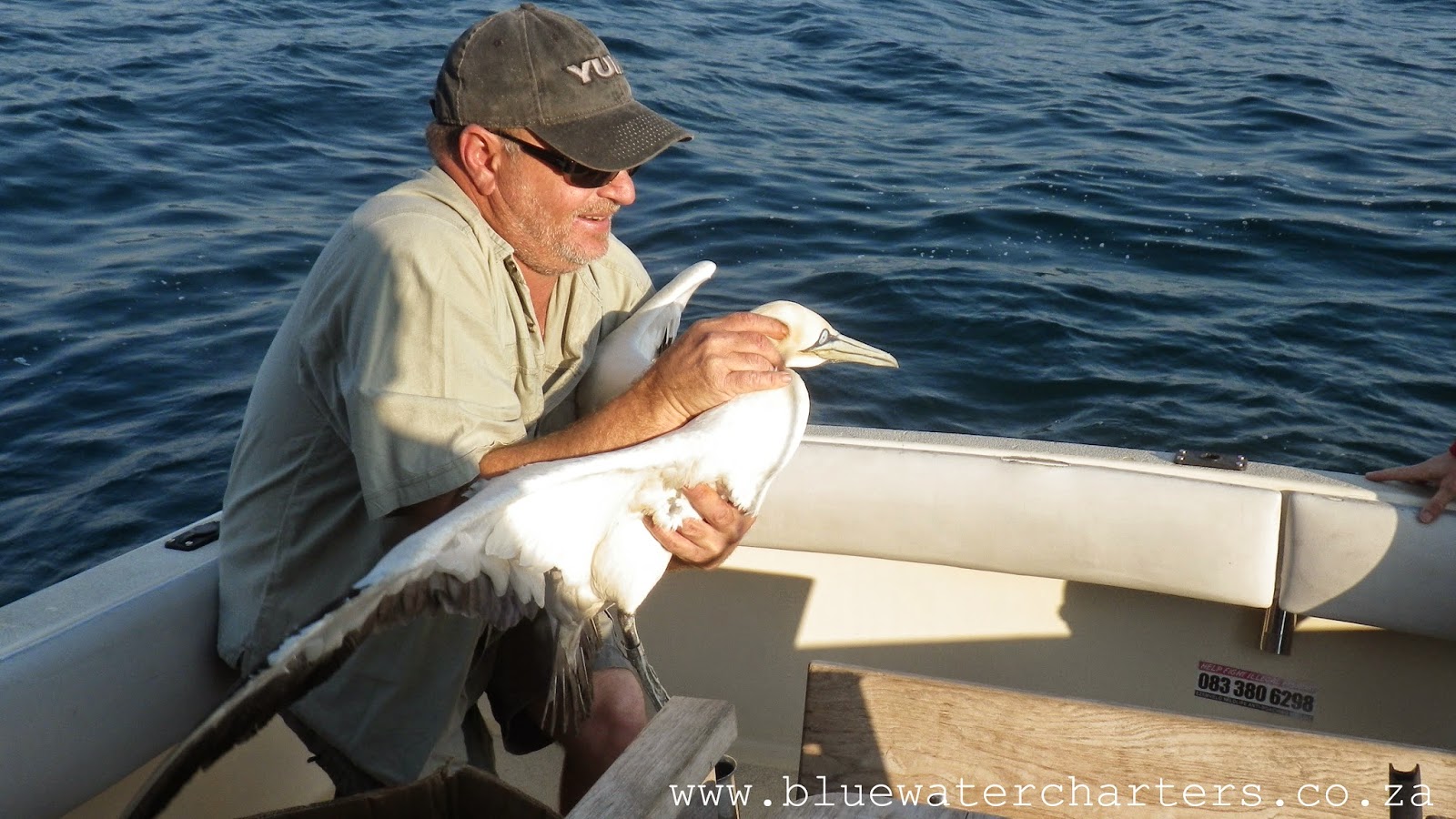 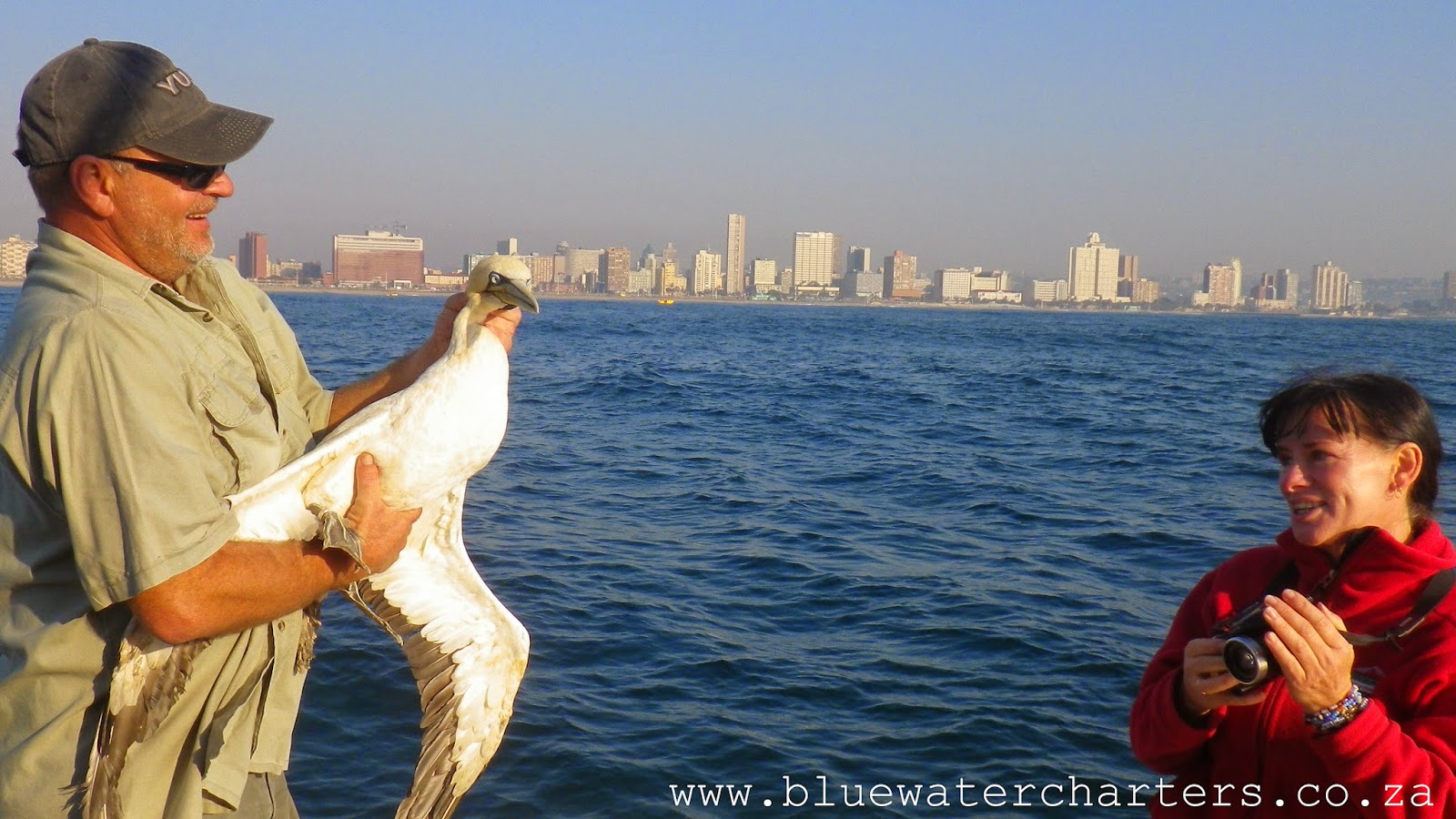 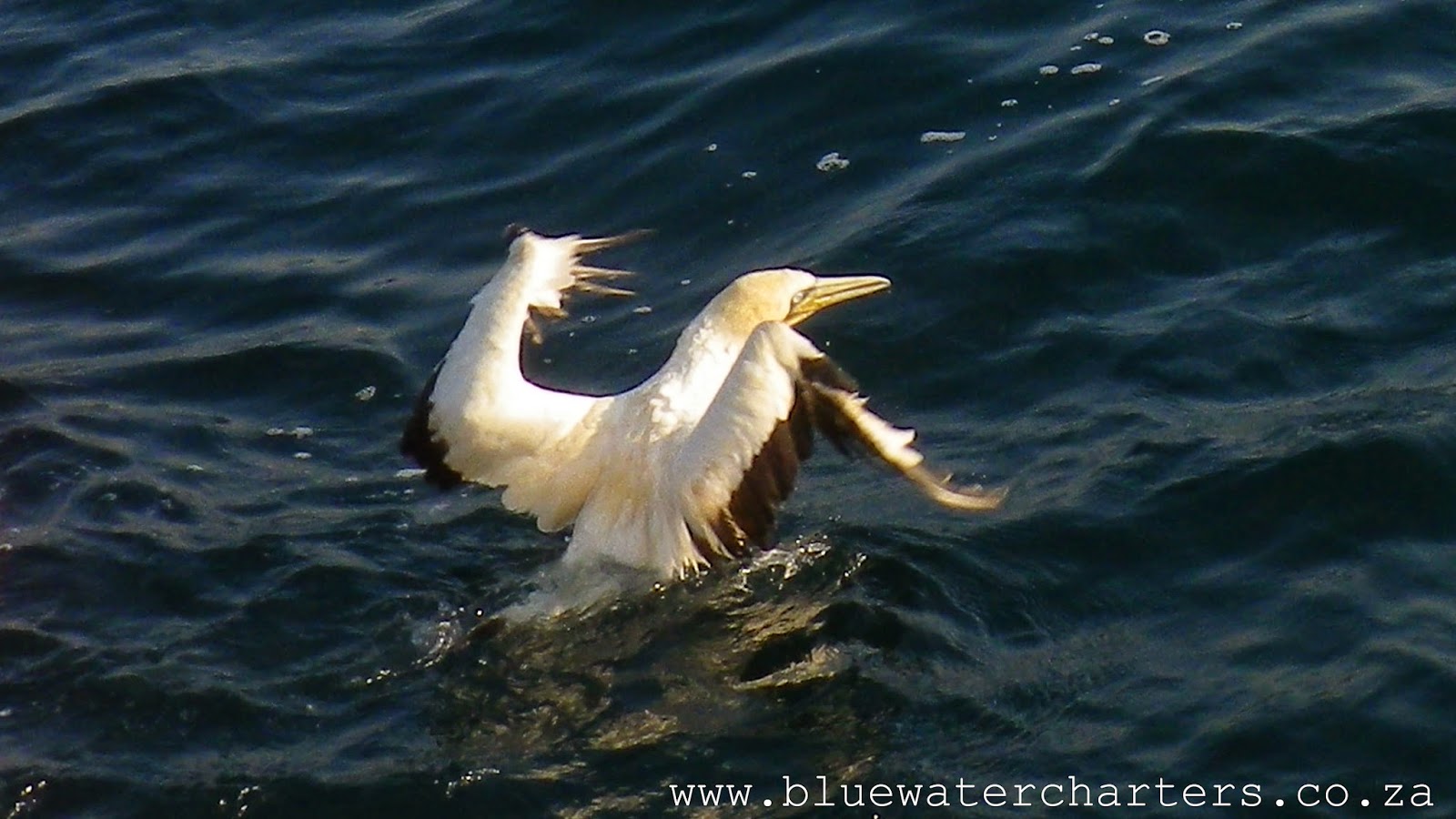 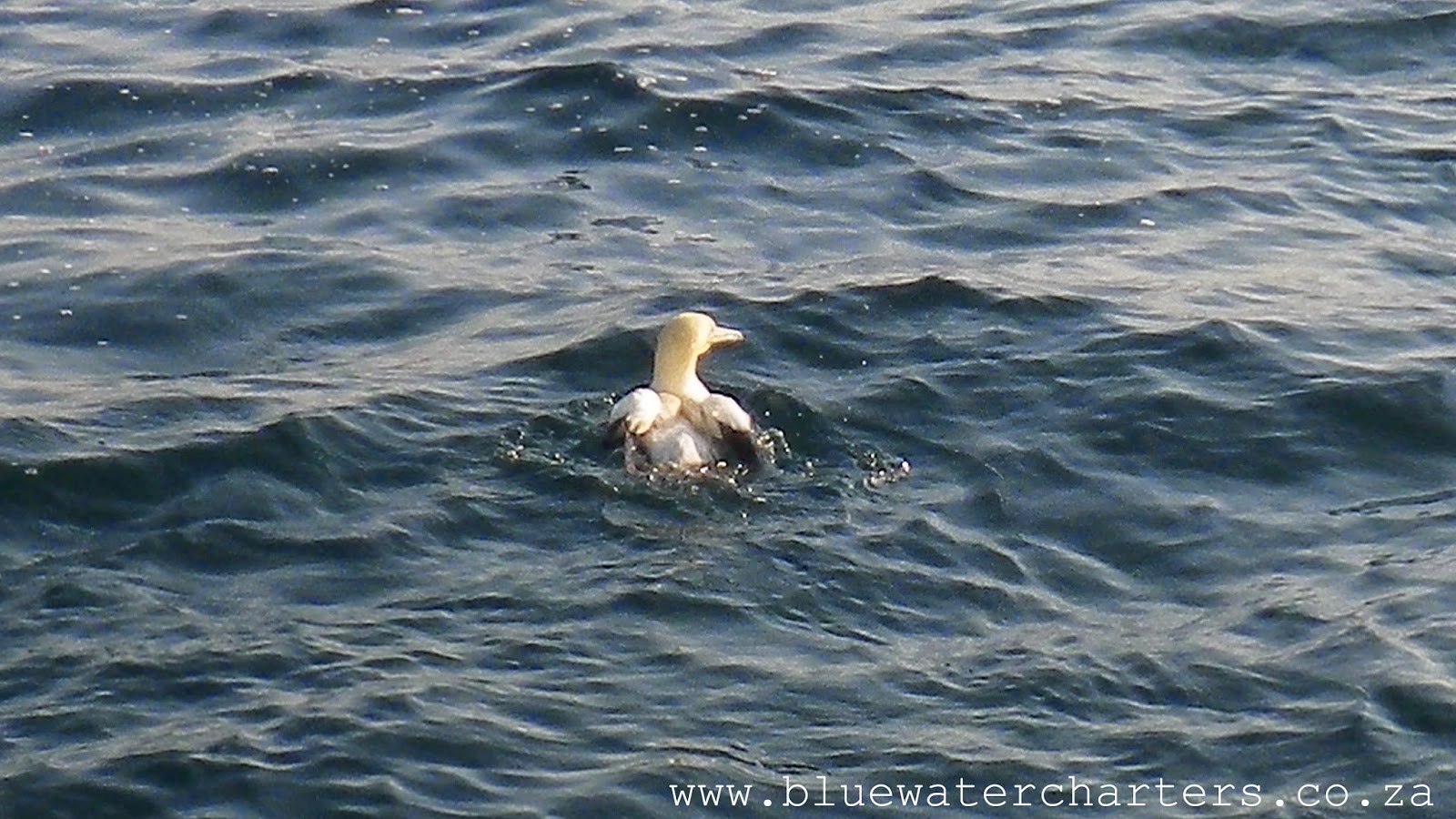 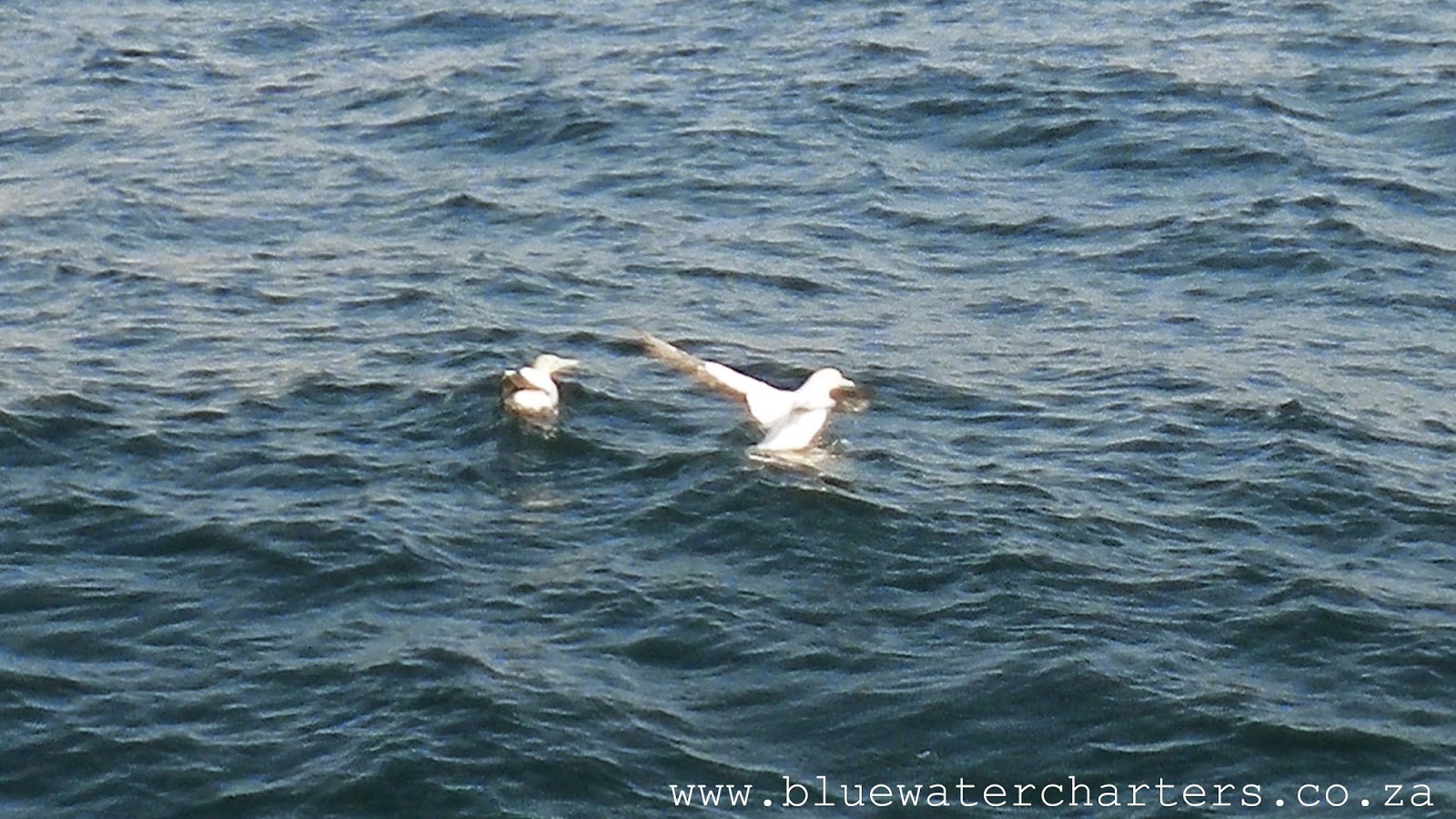 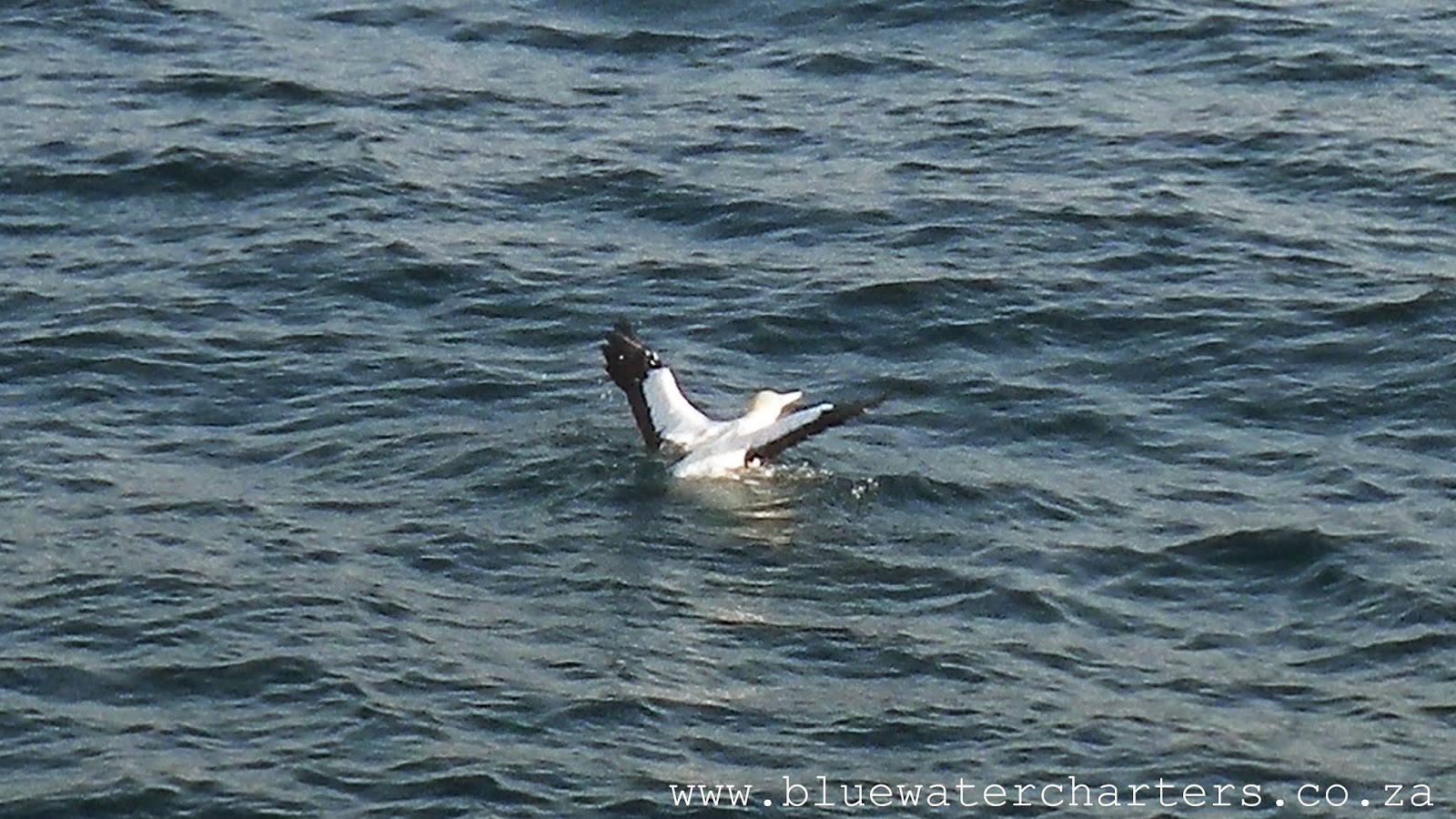 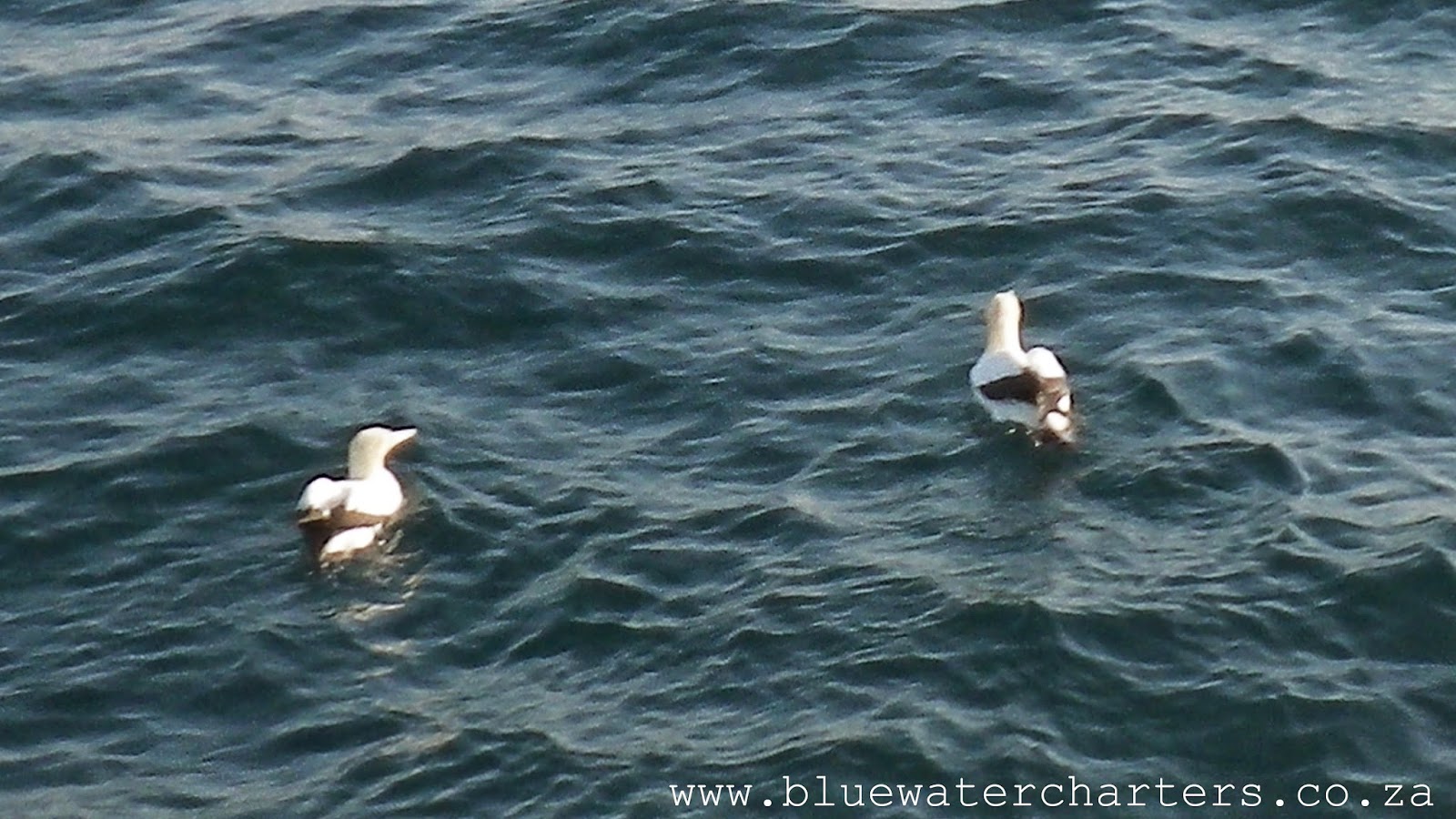 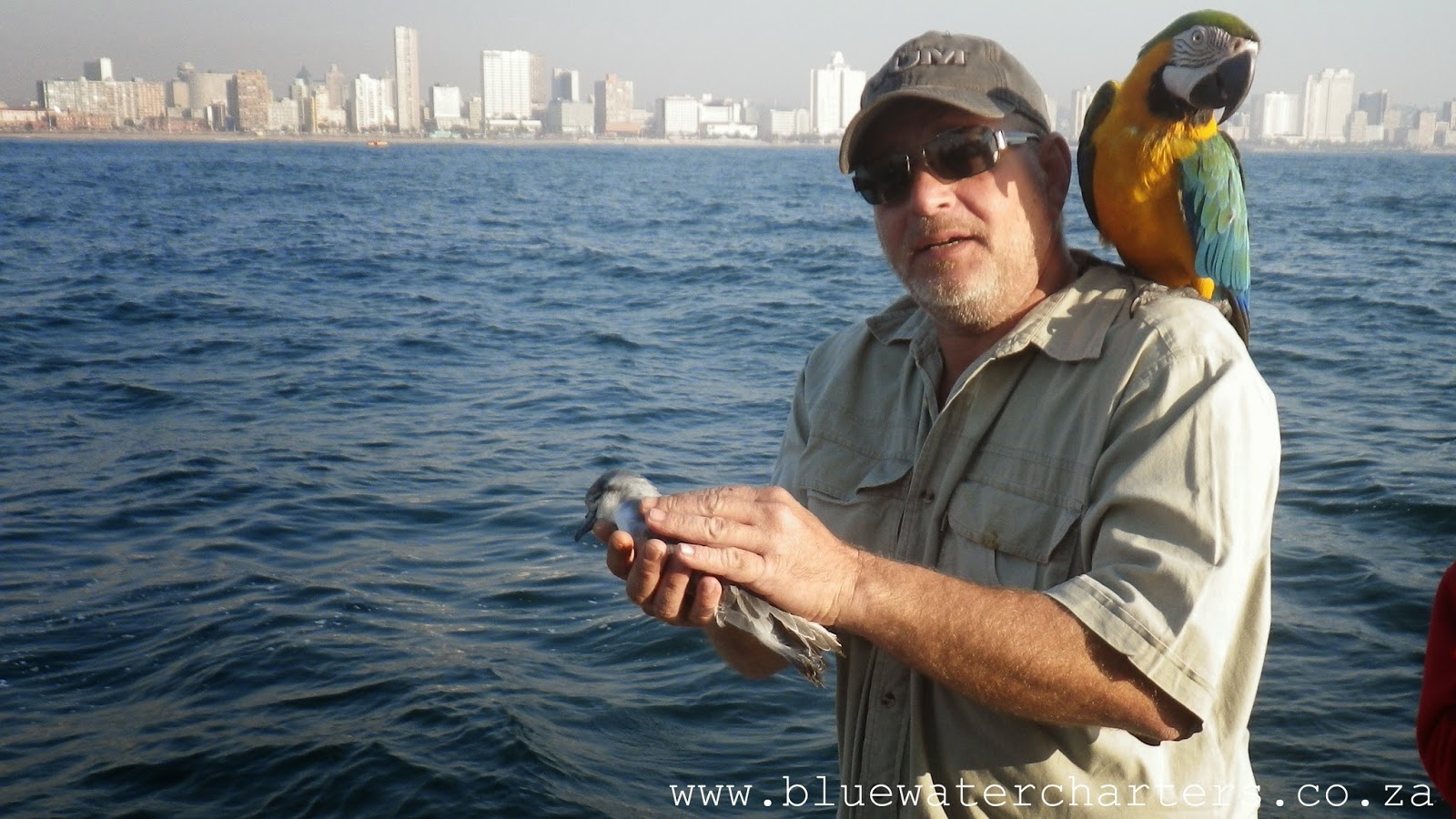 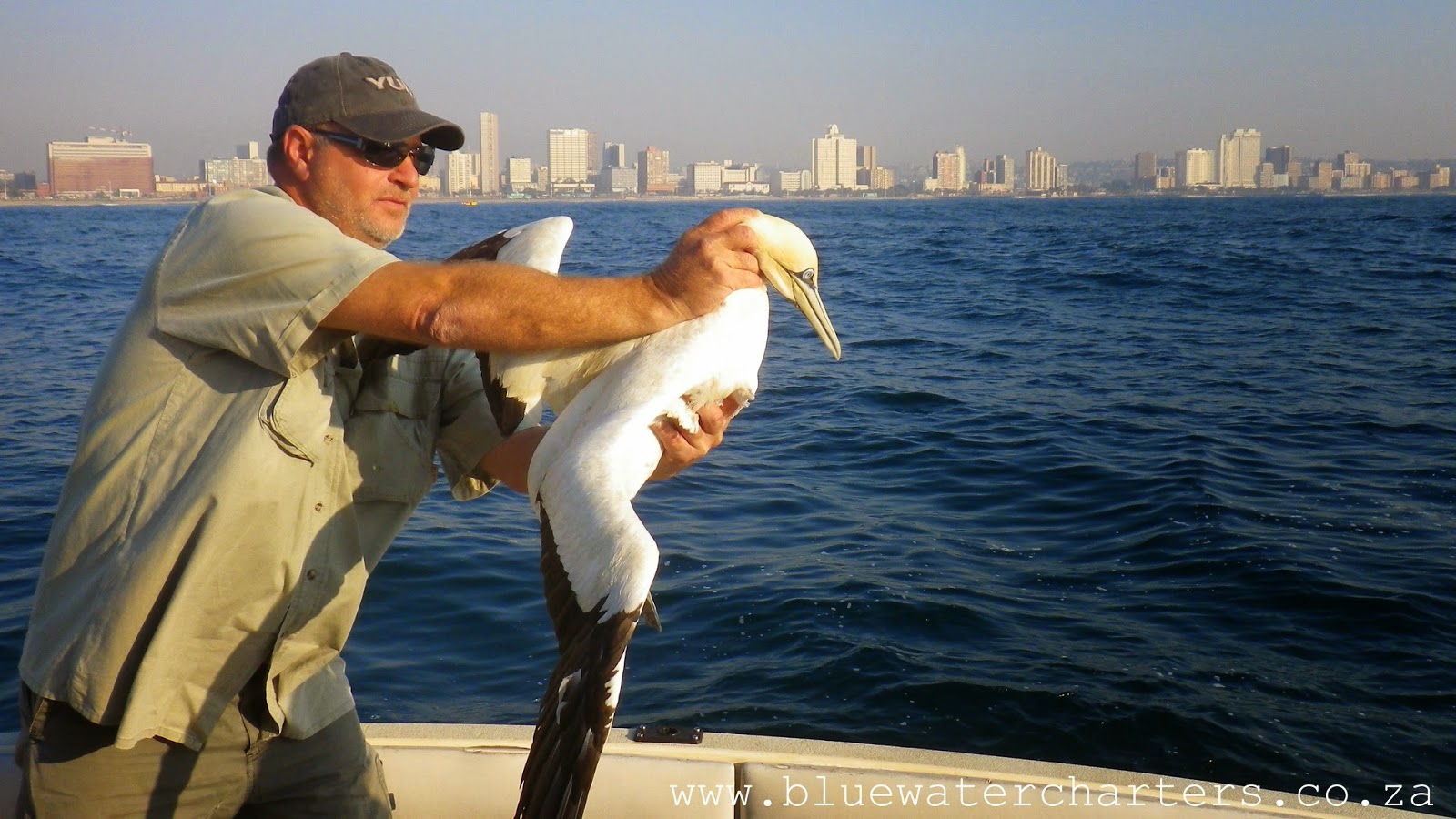 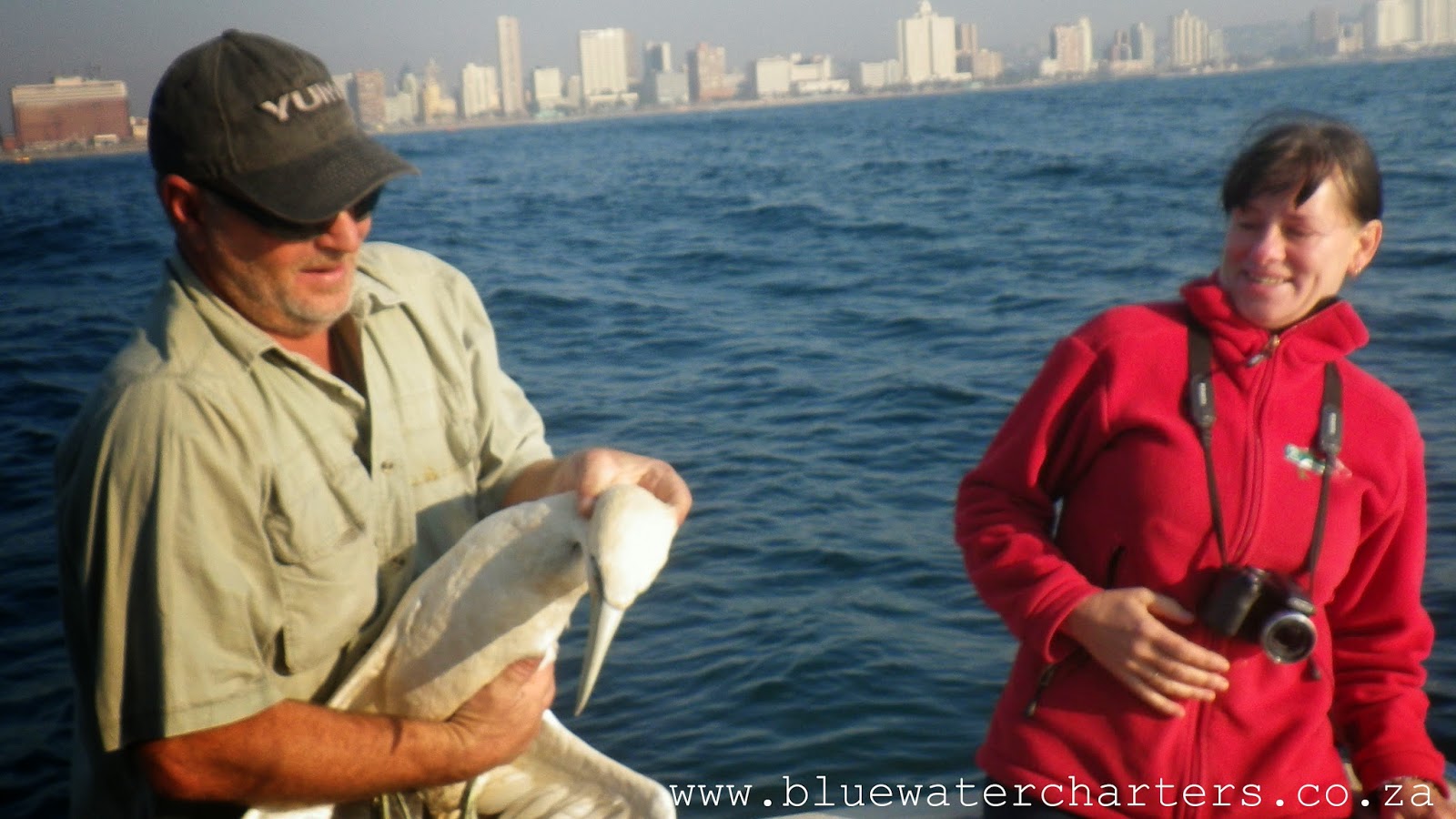 Posted by Blue Water Charters - Durban at 2:30 PM No comments:

FISHING REPORT: Light Winds, flat seas, blue skies, loads of Gannets and Albatross around, we had a Minky Whale swim right past our boat early this morning, and later in the day when drifting we had a large Humpback Whale jump right out the water making a huge splash about 200m from our boat. When we launched there was a light SW wind blowing and a S-N current. We trolled out to some of the deeper... reefs but all we got was a size Shad as we let out the 1st line, after that nothing. After trolling for about 1.5hrs we stopped and started doing bottom fishing, it was very slow in the morning and we got a few fish. Later the wind changed to a NE and soon after the current turned to a N-S and then the fish came on the bite, by then we were on shallower reefs. We landed about 20 fish that were keepers, some good size Soldier Bream, some nice Snapper, some smaller Slinger, A nice size Rockod and Englishman and a very nice size Black Tail. Beside releasing all the undersized fish, we also released at least 10 Trigger Fish and a beautiful Semicircle Angel Fish. On the way back we trolled some small Rapalas and got 4 Bonnies.
Posted by Blue Water Charters - Durban at 8:51 AM No comments:

FISHING REPORT: We went out for a short Eco Cruise/Light Tackle trolling trip this morning. we launched just after 08h00 and got back around 11h00 giving us 2hrs fishing time. There was a moderate NE wind blowing and sea conditions were very pleasant. Water is getting very cold now and I hope this continues so we can see some sardines soon. We saw a few whales when out there and even got a close up view of 2 as they came up near the boat, lots of Gannets around. We got 2 smaller bonnies on the way out and on the way back we managed to hook up a really nice size bonnie that gave a really strong and stubborn fight on the light tackle, we were hoping for a Yellowfin Tuna but never even saw any.
Posted by Blue Water Charters - Durban at 3:14 AM No comments:

Great weather for the next week

DURBAN: Weather forecast shows glorious weather, flat seas and light winds for the next week. IDEAL FOR FISHING. Book a fishing trip with us.
Posted by Blue Water Charters - Durban at 2:21 AM No comments:

FISHING REPORT: We went out at 07h00 this morning for a 5hr bottom fishing Charter. It was bitterly cold early this morning but warmed up as the day went on and 1 by 1 the layers came off. There was not many fish showing on the finder, but most of the fish we caught were quality fish. We caught a few Trigger Fish including a stunning large one that was dark purple with red fangs, these were all released. We got quite a lot of really good sized Soldier Bream (50cm), a few Slinger, several fair sized Stumpnose. About 30 fish in total. There was 2 ladies and 6 men, the ladies out-fished the men 2-1.
Water was green and cold sitting just on 20deg.C, we saw no Whales or Dolphins to day and other than a large flock of Cape Gannets that flew by us we saw no bird activity.
Posted by Blue Water Charters - Durban at 9:52 AM No comments:

Sea was dead Tuesday, water cold and green and no life, no birds.
We managed 1 small Frigate Tuna for our efforts. We saw whales again so whale season is definitely here.

This up-coming cold front that is predicted to arrive tomorrow is going to be a very cold one and might just be the catalyst to a good sardine run in Durban. We hope and wait.

There is a possibility a big storm and heavy rain after the heat and berg winds we just had.
Posted by Blue Water Charters - Durban at 1:51 AM No comments: 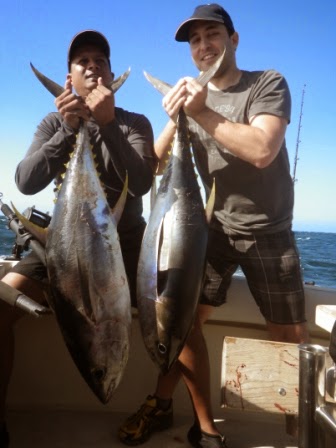 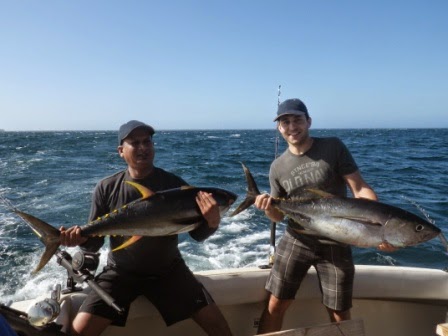 Posted by Blue Water Charters - Durban at 1:49 AM No comments: