Tuna on the bite today - Great fun on light tackle

Tuna on the bite today - Great fun on light tackle


We launched this morning at 06h00 for a short 5hr charter and hoped it would not rain, we had to dodge one rain cloud and so had a stunning day today, water was clean and warm. The plan was to try for a short while for some Game fish on the light Shimano Tyrnos tackle and if nothing took a lure then we would go do some bottom fishing. The Tuna had their own plans for us and we had non-stop Tuna action for most of the trip with 14 hook ups and landing 9 Yellowfin Tuna for the day. The one Tuna screamed off and took us into the backing, we thought it was a big fish; then it rushed the boat, perhaps a shark was after it and it was not as big as the fight it gave. Another one we thought came off but to our surprise it was there well hooked on the Rapala X Rap 40 which got many of the Tuna today. The sea was awesome and the fishing was really fun today. 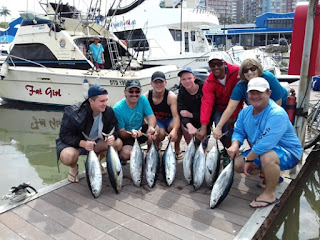 Posted by Blue Water Charters - Durban at 5:39 AM