Dorado on the bite today

Dorado on the bite today


We had a trip with a family from New Zealand today on Fat Girl, we started out with the whole family on a cruise out the harbour along the beachfront and then dropped of those that did not want to go fishing and headed out for a late launch and fished for 6hrs (Supposed to be 5hrs) with our Shimano Tyrnos 30 rigs on the light Tiagra rods as per the customer choice of heavy or light tackle. The sea was calm and flat, like glass, it was too nice, it is the conditions we always dream about and when we actually get to fish these days which happen so seldom one has to change ones tactics to get more action on the lures and so we set the whole spread further back and ran at 9-10 knots to get the lures working very aggressively and in the end this paid off. We found nothing in the shallows but with our speed were out deep in no time and went as far as 400m depth; on the way out after we passed the ledge we had a Dorado hook up on the Rapala X Rap and it was the little girls turn and she fought her Dorado like a champion, we also had another hook up on the same X Rap but this came off right at the boat shot out the water and the Rapala hit my head. After this the deep produced no further action and we stated heading back with a course set for one of my favourite deeper pinnacles, before we reached the spot I was heading to we had a double Dorado hook up on a Williamson Sailfish Catcher and a Stripey Tickler and they 2 fish did and aerial acrobatics display jumping all over the show and tangling many lines. The one fish was much bigger than the other and took us well into the backing and after knitting the lines and sorting out the tangles we got them both on board with the bigger one giving an extremely hard fight. I went over my track again and we stayed out a bit longer to try get more fish after we had reset the spread and we managed to get another Dorado hook up on the same Stripey Tickler and with no tangles this time we got it to the boat. Shortly after that we brought our lines in and ran back docking an hour later than we should have. 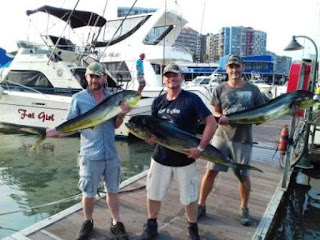 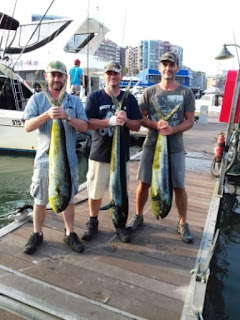 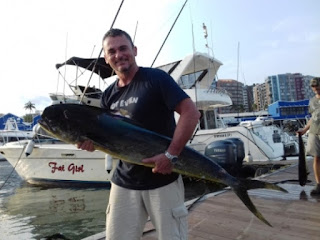 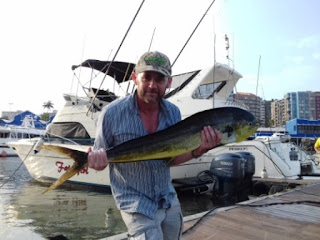 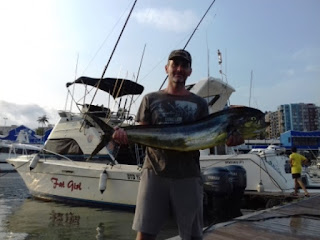 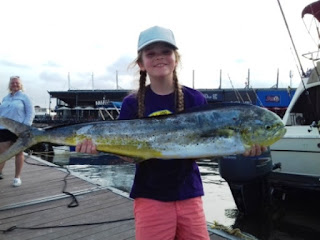 Posted by Blue Water Charters - Durban at 10:55 AM