What a day we had today, we launched this morning to look for a Marlin into a 12knot NE wind which just got stronger as the day went on until it peaked at about 28knots. Water was warm and light green. We headed about 70km out to our selected grounds and then turned and headed back. On the way out we hooked up a Dorado early but it came off on the jump after a short fight, then it was quiet for some time until we turned and just after we turned we had a small Marlin hook up and after 15 minutes it came off on the jump, we reset our spread and we had a Dorado take the line and again it came off on the jump much to all of our frustration, 3 fish off. Again we set the spread and continued in a following sea that was getting bigger as the wind was picking up and the Shimano Tiagra went off zzzzzzzzzzzzzzzz and this time after the jumps it stayed and after about a 20 minute fight we landed a small Black Marlin, as it was small we took the fish out for a pic and afterwards released it safely back into the water. We reset the spread and it was not long before we had a third small Marlin strike but it did not get the hook leaving us with a 3-2-1 tally. 3 Marlin Strikes, 2 Hook Ups, 1 Landed and Released. Frustrating to lose so many fish in one day but ecstatic we got the Marlin we set out for. Well done Bob on your first Marlin ever and your new personal best big fish. 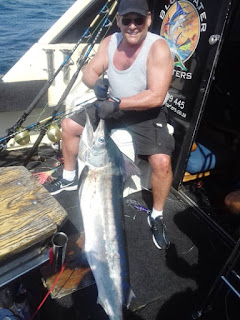 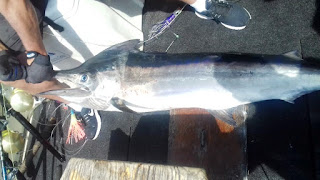 Posted by Blue Water Charters - Durban at 11:19 AM