Fishing Report – Durban – 08.01.2018
We had a 5hr trip and left early to try get some fishing in before the west came through, water was warm and over 27deg C. and it was stunning purple water out in the deep, probably too warm to get any fish, inshore the water was also a stunning purple but a little cooler and we managed a really king size Bonnie which reminds me that we have not caught any Bonnies for quite some time let alone a big one, a little while later the Rapala X Rap 40 running on one of the lighter rods went of and the Tyrnos 30 was singing landing us a good Wahoo. We also had a strike on the shot gun from something big, perhaps a Black Marlin or a large Wahoo, not sure never saw what it was. We got back to the dock well before the west came through.
If Wahoo are around then Black Marlin are around so the clock is ticking and it will be game on soon, the next 4 months from now until April is the best time for Marlin in Durban.
www.bluewatercharters.co.za 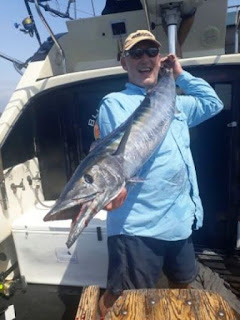 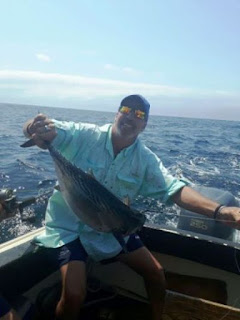