A busy long weekend and lots of trips. We had great weather on most days. On average the water temps were around 23.6deg.C, green inshore but nice and blue out in the deep. A fair amount of Yellowfin Tuna and Oceanic Bonito (Skipjack Tuna) on the smaller side were caught and what I would guess was probably our last Dorado for the season came out on Friday. We also saw some big Tuna on the sounder out in the deep on the thermocline. I think we can expect some nice Tuna catches if the conditions are right over the next 2 months and usually among these once can get a Sailfish as the water starts cooling down.


The worst thing happened on Tuesday with a Tuna estimated at around 25Kg was lost near the boat on light tackle when the hooks pulled after a 1.5hr fight. It is frustrating and disappointing when that happens after all the work has been done and no reward.


The highlight of the long weekend was a magnificent Sailfish caught on Saturday out in the deep and after a good fight it was released back into the ocean.


Some 6yr old girls had great fun on the backline with Mackerel and Sand Soldiers and a few nice Slinger were caught on other trips. 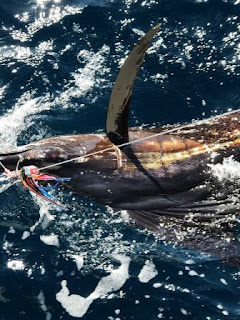 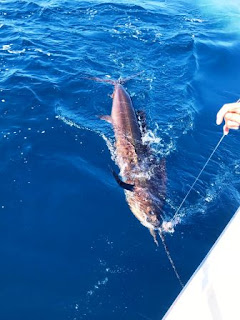 Posted by Blue Water Charters - Durban at 11:23 AM