OFFSHORE FISHING REPORT - Durban - 20-22/12/2015
The last 3 days has seen the waters of Durban go colder and green with a screaming S-N current, along with some horrid SW winds mad for some choppy days and very difficult fishing. On Sunday we eventually ended up inshore going back to port and landing 2 Dorado on the 20m line. Monday was a surprise as all the clean water was dirty as far as we could go. At 06h00 on Monday morning we had the port inside rigger go and about 20 minutes later we had a small Striped Marlin next to the boat, sorry no pic. A little later that day we got hit by a large black who did one jump and that was the end of the action as he just came loose. After bringing in the line we found that the Marlin had pulled the skirt right off the lure, other than that we had no action for the day except another on/off from something smaller. Tuesday was a simply horrid day, we found no fish at all, I did not even see bottom fish around on the finder, water is green from inshore right out to 400m which is as deep as we went. We ended up catching some shad on the backline before heading in. 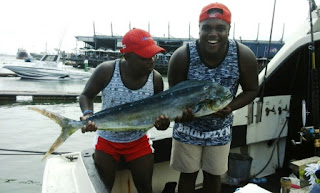 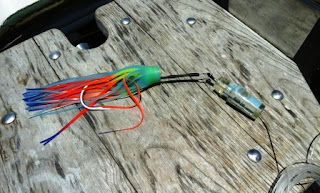 Posted by Blue Water Charters - Durban at 8:32 AM