After some quiet fishing the past week the last 2 days was a remarkable difference with loads of Wahoo Action, On Friday I went out with my Family and my Mrs got her first Wahoo and her second and her 3rd and so on. At the end of the day we boated 6 Wahoo and lost about 6 if not more. On Saturday it was the same we boated 6 Wahoo and lost about 6, we also landed 2 Yellowfin Tuna, all the Wahoo were estimated 12-15kg range but did not weigh them, Tuna were around 5Kg, every fish we caught the last 2 days came off Rapala X-Rap 20s and 30s trolled at high speed on 30lb class tackle. Lost about 6-8 Rapalas also. Grrrr. Water was warn at 26 deg. C, crystal clear and on the whole both days had great conditions with a N-S current. Memory card went south on my Pentax so only have a Blackberry pic and Mrs. don't want her pics on the net. 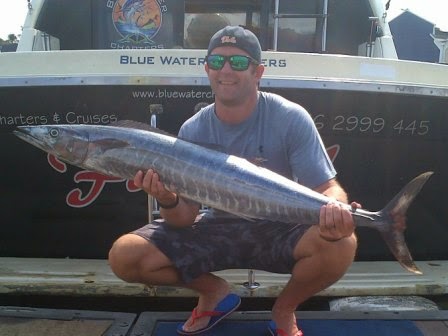 Posted by Blue Water Charters - Durban at 12:36 AM