OFFSHORE FISHING REPORT - Durban - 23rd -27th April 2015
Been a busy 5 days that started with a howling SW wind and ended with a howling SW Wind
Thursday we headed North along the coast line till past Umdloti and then headed out deeper, water was green and cold inshore but cleaner deeper out and we landed some smaller Yellowfin Tuna.
Friday we headed out deep to the canyons to look for a blue Marlin with no luck.
Saturday and Sunday we fished the Durban Couta Competition and managed to land a Couta (King Mackerel) of 8.7Kg and we hooked up a massive Zambezi (Bull) Shark (Brown Marlin) which we eventually got to the boat after 2 hours. There was around 380 boat fishing the completion with only 22 Couta (King Mackerel) weighed in and ours was 400grams short from the 15th place prize effectively putting us in 16th place.
On Monday we went far north looking for a Black Marlin and we only managed to land a really good size Yellowfin Tuna. On the way back in we heard on the radio that some poor chap had been blown out to sea on his paddle ski and we assisted in the search, the NSRI had sent out to boats and they eventually found him. 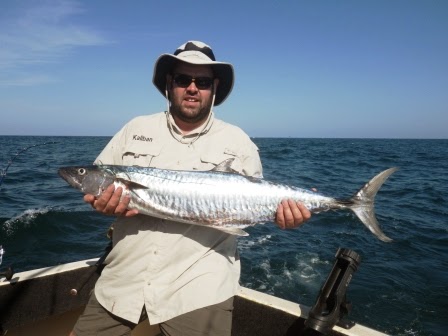 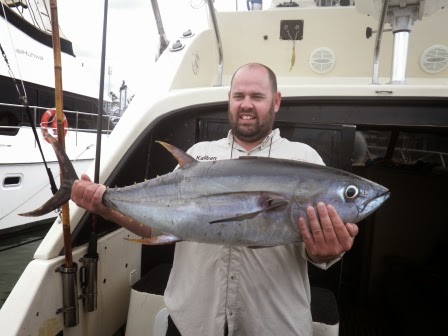 Posted by Blue Water Charters - Durban at 11:26 AM