Went out yesterday, the morning was stunning but when I saw the red sky in the morning as we left the harbour I knew the day would end up ugly.

We made our way North, lots and lots of Albatross inshore and we got a good serving of Bonnies,... as they were small we decided to go light and set a spread with my Babies.

Later at som good bottom grounds up North in 50m we tried to get our baits down and even with 2Kg of sinkers (4 x 1/2Kg) we still could not get to the bottom as the S-N current was screaming, I even tried running the boat into the current but this just caused tangles so we gave up.

By this time the wind has started picking up and so I decided to head towards the coastline and hug the shore whilst we trolled back.

Was quite interesting and every so often we woul hit a pocket of small bonnies and all the lines would go, we only ran 5 lines as the wind was hectic by now and the rappies did not want to swim into that current and kept on popping.

In 16m of water at LaMercy in 21deg Water we got a surprise with a small Dorado. Go FigureSee more 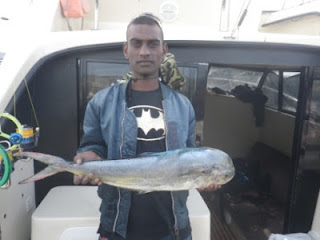